You are here: Home>Port of Blyth>Oral History Recordings.>Oral history recording of Ann Kirkpatrick (nee Patterson) of Blyth, Northumberland, recalling the fishing industry in Blyth in the 1950s.

Oral history recording of Ann Kirkpatrick (nee Patterson) of Blyth, Northumberland, recalling the fishing industry in Blyth in the 1950s. 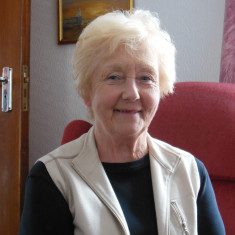 Oral history recording of Ann Kirkpatrick (nee Patterson) of Blyth, Northumberland, recalling the fishing industry in Blyth in the 1950s.

(With comments from Hugh Patterson)

Fishing in Blyth in the 1950s, and the Golden Days

I think you’re going to tell us about the fishing in Blyth in the 1950’s?

Ann – What I can remember would be from before dad’s boat came to Blyth. I can remember grandad’s coble, the Margaret and William, and being taken out to the boat in the bay and sat in the boat with grandad. And me dad came to fetch me and he climbed up the ladder on the pier, with me in one hand. He put me over the rail and the man at the top wanted to take me but I wouldn’t let him so dad had to struggle. After that, the next memory was when me dad’s boat came to Blyth. There were quite a lot of people on the quay to see it.

How old would you be?

Ann – I was 5 when the boat came to Blyth. Dad had come back from the Navy and was back in the coble with grandad. And then he bought the boat with some partners – Harold Reed, Bobby Liddle.  Then Bobby had to leave because he had problems with his hearing and couldn’t go further out with the boat.

I can remember that day, because it was the only time I went out with the boat, and we went up the river.  That was a seine net boat.

What’s the difference between that and a coble?

Ann- The coble wasn’t rowed then, it had a motor by then, but it didn’t go so far out. They went for crabs, lobsters and salmon. I can’t remember it, but they used to do line fishing. Was grandad still at the line fishing when you got the boat, dad?  They didn’t do any net fishing.

Hugh – No, just for the salmon. The difference between the boats was that the Margaret and William was an open boat, 30ft long. Where the Golden Days was a decked boat, with a wheelhouse, and a bigger engine. 60 foot overall.

Ann – You could sleep aboard, they had the facilities.

How did you choose the name?

Hugh – Originally we called her the Golden Dawn, then we got word we had to change it because there was already a Golden Dawn on the English register – it had been carved in and we made it Golden Days as it’s nearer to “Dawn”.

Were there other seine net boats at Blyth?

Hugh –  There was the Sceptre and one or two strangers. A couple from Sunderland, and one from Grimsby worked out of Blyth for a while. Now and again different boats came from Shields to work 2
for a while. There wasn’t many from Shields.

Why did you get the boat built?

Hugh – The lines were a lot of work, and you didn’t catch many fish compared with the seine net.  Further north in Seahouses they were working seine nets, and at Amble, so we got the same as those.

Was it exciting, Ann?

Ann – It was, it was wonderful really. But I was only allowed to go down there with dad, which I used to do on a Sunday. They had a wonderful cabin like a treasure trove.  Until I was a bit older I didn’t go down except with dad. Or sometimes with mum to see him come in, to see him land the fish.  I didn’t realise that everybody’s dad wasn’t a fisherman. There was a lot of miners, but I was in a minority for the fathers being at the fishing. It was good. I loved the beach and the harbour – and we still miss it, because we’re not allowed to go down where he had the boat – you have to have a pass. It was at the middle jetty, in the corner, next to the Alexander Meake.

I think you said they didn’t like women on board?

Ann – Oh no. I think all fishermen are superstitious – maybe not so much now, because there are a lot of women working on the bigger ships. As well, it might have been because they didn’t have a toilet! They did go out for quite a long time. I used to go on the boat when it was in the harbour, but I never went out for a trip after the first time.

It was like a treasure trove – full of old fishing gear, nets and rope – it had that smell….

Ann – They had all kinds of things  – old sou’westers and all kinds hanging up. Dad used to go down
after he finished fishing, he would go down in the cabin to chop sticks.  Dad, what was that fire called?

Ann – It had a top, like, to boil a kettle and a door to put sticks in. He used to cut wood on that table that had a pile of sawdust underneath, it smelled lovely.  The cabin was big, with lots of equipment. I think some of what grandad left behind was still there.

What kind of fish were you after?

Hugh – With the seine net you could go after cod and haddock and whiting, or flat fish like lemon sole. We got a sturgeon once.

Ann – You’ve got to offer that to the Queen.

What happened?  Did she not want it?

3
Hugh – She never got the chance. The Blyth News was there. I took it up to Harper and he asked “Who’s going to pay for the telegram?” but neither of them would pay for it, so she didn’t get one! It was only small – about 3 or 4ft long. Eventually Harper took it and showed it in his window,  then sold it in Shields market. He didn’t get much for it.

Hugh – He took them all. He used to take the Sceptre’s, later on when the Good Fellowship was down from Seahouses, he took theirs as well.

Hugh – That was a while ago.

Ann – Well, I can remember standing in the front window here, and all the Dutch lads coming up and they had their clogs on and their blue boiler suits and their Dutch hats. Like drawings you see on tiles.  They still wore the older type clothes.

Ann – Those and the blue ones.  The barkett had a round neck and no fastenings. Does it fasten down the back, dad?

Ann – What was barked cloth? Was it treated to keep it waterproof?

Hugh – partly – but it was really “kutch” – that’s what they called it. They dipped the nets in it as well. It was a preservative – partly that and partly for the water. The herring nets were dipped in the kutch.

Hugh – No, it was a big lump of …oh …  It was brittle, like a lump of coal, but brown. You broke it up into pieces and boiled it.  Later you boiled the cloth to make the jerkins – like a jersey, but material.

Ann – With no fastenings, and they had those big Dutch clogs on – you could hear them coming up the road. How many boats would there be dad? You could walk across the harbour.

Ann – No, there were more than that! Course there was!

Hugh  – They just came here at the weekends. They used to put the herrings into barrels and kept them on board and went home with them. They were packed in barrels and salted.

So they just came in for a break?

Ann – they used to go the shops. I had a friend whose mother was Dutch, and she (the girl) could
4
speak Dutch. She worked in a shop and she used to go round the shop with them to translate – she was a tiny little girl. Her mother and father welcomed the lads to their home. They were made very welcome. Never any bother.

I suppose they stopped coming when the herring stopped?

Hugh – The herring went south.  The coopers and them that sealed the barrels…..

Ann – I suppose there would be people who lost jobs when the herring went south?

Hugh – I don’t know – The Dutch would just follow the herring and go back to Holland.

Ann – Way back when, they had the fisher lasses who followed the fleet – but that was way, way back.

Hugh – Some were exported to Russia…. well, they fished the herring out and that just went.

Ann – they fished the herring out and there wasn’t any herring here. They put restrictions on and they didn’t fish for herring for a long time.

Hugh  – Later on, they changed their ideas and trawled them rather than drifting. Drifters just drifted in a straight line down with the tide – that’s why they’re called drifters. Trawling was a different kind of fishing altogether.

As you were growing up Ann, did you become aware of how dangerous the fishing was?

Ann – We were aware, because mam used to worry. If it was bad weather and he was out, we went down to the harbour to see.  Later on, when I got married, mam use to ring Eddie and say “He’s not in” and we would go down. And they would be in, but it was a long day.

We were very aware of the weather. We always always listened to the weather forecast because it  ruled their life.  There were quite a lot of times when they couldn’t go to sea, you couldn’t make any money when the weather was bad in the winter.

I wasn’t fully aware of it until I saw something on television (quite a long time ago) and I saw a film about fishing boats and that’s when I realised it was very, very risky. My Eddie could’ve gone to sea with me dad, but he wasn’t a fisherman and anyway, mam didn’t want him to go – she said one fisherman in the family was plenty.  But everyone in Blyth had a dangerous job then – they were in the mines, in the shipyards.

How long did you go on with the fishing with the Golden Days?

Ann – Oh, sorry dad – in 1980. They sold the boat because there weren’t any boys to take it on. Dad had had a pulmonary embolism and was