You are here: Home>Port of Blyth>Oral History Recordings.>Oral history recording of Billy Whinnie of Blyth, Northumberland, recalling his experiences of working on the dredger "Crofton" between 1979 and 1997.

Oral history recording of Billy Whinnie of Blyth, Northumberland, recalling his experiences of working on the dredger "Crofton" between 1979 and 1997. 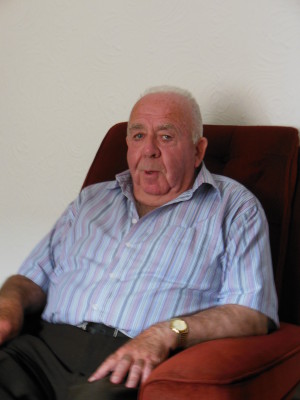 I was born in Blyth in 1938, in Jubilee Road. Lived in Blyth nearly all my life.

Started work on Blyth Harbour in 1979 as deckhand labourer. Started with view to working on either the Crofton or the Cresswell as required.  Working on Cresswell involved driving the dredging crane as well, but a deck hand was a dogsbody. I was also responsible for mooring the Cresswell. She had to moor partly to the quay and partly on anchor. I’d get into a boat, get landed ashore and put the wires ashore, get the anchors put in, and when she took her position, then the boat would take me back and put me on board for my day’s work.

The Crofton was a suction dredger. Had twin suction pipes.  Could fill mud in half an hour. Once you got a certain amount of mud in, the water would spill over the side. But when dredging sand, she could lift 750 tons of sand in 1 hour and 20 minutes. Did 3 trips a day on sand.

Why do you need dredging at Blyth?

The River Blyth is not a natural river. The River Blyth’s been widened and deepened, but the amount of water flowing down from the hills has never increased, so there’s no fast flow of water. A fast flow would carry detritus out to sea.  The River Blyth’s just a big sump, and needs continuous dredging to keep the depth.

How much dredging did you do every year?

Crofton did 40 weeks dredging a year – Nearly 300 days in a good year. Didn’t go to sea in bad weather and might be stopped from going to sea for a week or 10 days in the winter. She always had problems with her engines – 2 engines – diesel electric. Original engines were not designed for sea going – designed for static use. If she listed to one side there would be a problem of fires starting because oil on top of the engine ran over the exhausts.

If she started a starboard list you would wave furiously to the lads on deck – “Don’t discharge any more, keep her level!”. Engines were replaced in 1983 – much better and they improved control. Resolved a lot of the problems, but there were still problems with salt water getting in because new pipe-work didn’t fit properly.  Salt water could get into the engine. She often came home on one engine.

After the Cresswell went,  there was a new idea – ploughing. A tug pulled a box called a plough. Pulled mud off the side to be picked up in the middle by the Crofton. I’m not sure if it really worked.  The Crofton couldn’t do work close in – had to stay 20 feet off or her pipes could get caught.  Nowadays they get a contract dredger in about twice year. The main concern is the
2
approach to the harbour which is sand – They need to keep the channel clear because the sea can fill the channel in with sand in one weekend.

When I was working,  it was always “Get on the sand!”. The Crofton was good at shifting sand. When she first came, a pipeline was put in in the South Harbour so she could discharge sand onto the beach – the idea was to conserve the beach. Didn’t work because she was discharging dirty sand and stones. Also there was a problem of getting lined up properly and she could only do 2 trips a day, not 3, so they gave that idea up. Never did that in my time, we used to discharge at sea.

Were the dredgers a challenge to handle?  They don’t sound very sea-worthy

Oh well – the Crofton was reckoned to be the last word, she was very modern. The skipper had a responsible job. Bridge controlled – skipper had full control of the engines.

There were originally 12 crew, later cut down to 9. One was the cook – by law, with 12 crew you had to carry a cook.  He would cook a hot meal, but apart from that his main job was to keep the bridge supplied with tea. They had a skipper who was a champion tea drinker and the cook was sweating up and down all day bringing up cups of tea. Then he was told he would have to take on deck duty as well, only cook for 2 hours a day. Bridge had to have an electric kettle and make their own tea.

Upstairs – (seniority went by where your cabin was) –  There was the Skipper, also the mate who  could stand in for skipper, and 2 engineers. Down below, cook and 1 deck hand. 2 deck hands in the middle, and 2 greasers.  The greasers had best job – had to keep engine room supplied with lubrication oil, hydraulics oil.   Had it down to a fairly fine art not to do too much. When final cuts came, greasers’ jobs went.

Why did you need cabins?

Cabins were needed to get changed and keep spare clothes. Could get soaked when working. Didn’t work full time all day, specially when ship was proceeding to sea. When not working, you would wait in your cabin to be called for your job.  Soon as you heard the engine stop, you were on deck again. In half an hour to an hour on deck you could get very cold on deck in winter.

If you were alongside you worked with a break for a cup of tea and a break for lunch. Going to sea, you got a twelve hour day, you might have the odd quarter hour when you could read the paper. One fellow had a box of old medals he liked to look at. I liked to sit in my cabin read shipping books.

Working alongside, you’d work 8 hours full blast. On the other hand you weren’t rolling around all day! Because the Crofton wasn’t a good sea boat.  You might go on deck and come back to find all your clothes on the floor.  She rolled alarming. The second engineer said – “She’s the worst ship I’ve ever been on. She would roll on wet grass!”. The Pilot came on board one day – He’d been to sea – “Oh, this is nothing!” – he was soon hanging onto the hand rail, looking at the sky!

The Cresswell was a much better sea boat. Didn’t roll much. She might pitch, dig her nose in, but she did remain vertical.

What about the dredgers before the Cresswell and the Crofton – could they dredge rock?

The Cowpen, she had a bucket ladder, she could shift anything. If there was hard stone, she would lift the clay out of the way and tip up the stones. She stopped at nothing.

3
Didn’t your dad remember her digging out the West Basin?

They put kedge anchors onto the back of the basin and pulled the Cowpen’s stern in and dad said he could see the grass just falling away. She’d do that for an hour then go away to sea. She created the whole of West Basin. Did all that single handed.  She could do anything, could the Cowpen. She was 50 year old when they sold her and she was still in Lloyds Register 30 years later.  The Crofton didn’t last that long. I don’t know where the Crofton is now – I’ve lost track of her.

There were always dredgers. When I was very young, I’d always go down to the quayside, there was always something to see. There’d be ships loading, ships sailing and ships arriving. Boatmen moving, the ship yard working, the dry docks were working, Bolckows would be going. Always something to see, someone to talk to. You go down now, you can stand there… I still go down most days.  Last Friday was the first time I’d seen a ship moving this year.  One time, there’d be half a dozen ships on the north side at any one time. Times have changed.