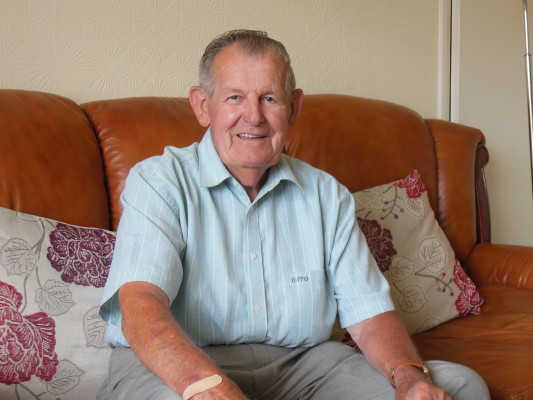 Born and bred in Blyth. Left school in 1946, aged 14. Left school on Friday and started
work at Blyth shipyard on Monday, at the rivet store. Would start at 7.30, heating the rivets. Worked there for a couple of years before he started apprenticeship in the joiners’ shop at age16.

When you started your apprenticeship, at first you were fetching and carrying for the joiners –
screws, nails, etc. You got to know all the different types and sizes by sight, you didn’t need to
measure them.

After 6 months of that, you would work with a joiner.  He worked with smashing chap, Tommy Mallison.  They were putting the teak doors on the ships – that was heavy work as teak is a heavy wood. When they finished on board the ship, they went in the joiners’ shop to make the doors. Was taught to make all sorts of furniture – it was very high quality.  They spent a lot of time finishing them off.  They used woods from all over the world, for both cargo and passenger ships.

Some examples – Swedish ship (Setos?)  –  Tommy made double doors for the saloon, with three
panels of etched glass in each, depicting marine scenes – below-sea, sea level and sky.  Blyth was renowned for its woodwork.  Staircase for the Penrith Castle – centre stairs, dividing into two stairs and ending in a balcony. Andy made a chartroom table, with special drawers for the charts – unique design. A pilot who joined the ship in Egypt commented on the unusual design and recognised it as Blyth-made.

The joiners went on sea trials and were responsible for all the keys for every lock on the ship. Made a temporary board for them and one day all the keys fell off their rack during heavy weather and ended in a heap on the floor.  He had to sort them all out!

Can’t remember how much the apprentice pay was, but his first pay at the rivet store was 18s 8d for a 44 hour week at 14 years old. As an apprentice, you had to buy all your own tools – had to save up and get them one by one. One of the first was your claw hammer. Compares the price of a modern plane with his original one.

After serving his time, went straight into RAF, then straight back to shipyard to start as a journeyman. They had to keep your job open.

The yards were very busy during the 1950s. It was one big happy family and you knew everyone. Would meet lots of people you knew when you into town shopping.