You are here: Home>Port of Blyth>Oral History Recordings.>Oral history recording of David Carter of Blyth, Northumberland, recalling his experiences as a Foy boatman in Blyth Harbour.

Oral history recording of David Carter of Blyth, Northumberland, recalling his experiences as a Foy boatman in Blyth Harbour. 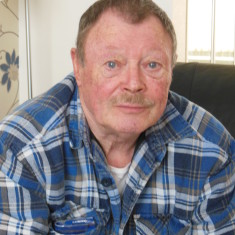 Part 1 – Sinking of the Chipchase

At the time, Dave was working for the Harbour on the dredgers and barges and the floating crane. He could be moved to any job – especially as he been in the merchant navy and was used to shipping. When the Chipchase was called out that day they were two men short – the other man with him also didn’t usually work on the tug. It was called out to put a ship into dry dock.
That wasn’t the Chipchase’s normal job. It was usually used to do different jobs – for example to take the floating crane out of the piers to change the floating bouy – generally doing work in the port, but not shipping. It belonged to the port, not to the tug company. She was used that particular day because the tug company’s tugs were too busy.
While they were putting the ship into the dry dock, the pilot on the ship changed his mind – he could see another ship coming down the river and wanted to get out of the way. He ordered full steam ahead and straighten up and that pulled the tug over.
The reason tugs had to be used was to turn ships around. They did not have bow thrusters then, and only had one engine. If a ship was going up river to Bates’ the tug would take you up to the turning basin, and then you would steam alongside Bates’ – the same if going to Alcan, they had to go up river, turn round and come back down, but there wasn’t enough room for a ship to swing round.
The day the Chipchase sank, you couldn’t have turned a big ship round there – there were ships at North Blyth and at the Wimbourne Quay. The ship they were putting in dry dock was only a small ship, it was a “flat iron” ship – so called because it took coal from the Northeast down to Battersea Power Station and had masts and a bridge that could drop to get under all the bridges.
They were trying to put this one into dry dock when another flat iron ship left the West Staithes and the pilot changed his mind. When he pushed the ship full ahead he managed to sink the tug, because the tug had had to slack the guy rope off in order to swing the ship round.
The tug kept going further and further over and Dave’s workmate asked him “How far can this thing go before it capsizes?”. He replied “Not much further – and by the way, I’m leaving now” and dived off. When he dived off, he nearly dived into the propeller which was coming up out of the water. That tug had two propellers, and he just missed it.
Can’t remember skipper’s name. There was one engineer, the donkeyman (it was a coalburning tug and he filled the coal up for the boilers) two on deck, and the skipper. The skipper was on top of the bridge, not inside the bridge cabin, and he was struggling to hold on.
As soon as he surfaced, he saw it go over and sink. The ship had sunk, and everyone had got off except the engineer who was in the engine room. Then a massive air bubble came out of the engine room and he popped up in the air bubble. He never worked on that tug again. In fact he stopped working for the harbour. Dave swam to across to a ship called the Queensland. They had seen the disaster and put the pilot ladder over for him to climb out.
The foy boatmen who were waiting to moor the ship in the dry dock steamed across and picked up the other lads. All went to hospital for check-ups.
He doesn’t know what was said about the pilot and can’t remember his name. There was no court case – Perhaps if someone had lost their life there would have been.
He wasn’t involved with the raising operation – he was back on the dredgers by then and not long after that he went onto the foy boats.

Comments about this catalogue record